What started as a vision, of Founder Edward “Eddie” Dopkin 10 years ago, has since become a much-loved and respected landmark for Award Winning Breakfast, Brunch and Lunch in Maryland.

In memory of Eddie, and to celebrate this milestone occasion for the restaurant he built, Miss Shirley's was honored to have a Ceremonial Street Sign installed by the City of Baltimore on Thursday, May 7th.

Managing Member and Son, David Dopkin, as well as Mayor Rawlings-Blake presented heart-warming speeches, in memory of Eddie and all that he did for the surrounding neighborhood.

Although Eddie was widely known as a successful restaurateur in Baltimore, he was also a whole-hearted philanthropist and driving force within the community. Through Miss Shirley’s Cafe, Eddie donated to over 100 local schools, organizations, charities and fundraisers in Baltimore and the surrounding neighborhoods each year.

As a pillar in the business community of Roland Park, he worked on countless neighborhood initiatives, including facade and patio improvements to businesses on Cold Spring Lane. To ensure the beauty and tidiness of the street and community, Eddie picked up trash along the roadsides on a daily basis, made regular calls to 311 to phone in anything in need of repair, and hosted a team trash cleanup at local Stoney Run Park.

Eddie took ownership of the commercial strip and was committed to making Cold Spring Lane beautiful during all seasons by replanting flowers four times a year within the 2-block stretch, and started the tradition of adding festive decor and landscaping during holidays.

He was always happy to lend a helping hand to anyone in need of assistance. When the Roland Park Library needed a new roof in 2005, Eddie was quick to step up to the challenge. He organized a fundraiser called “Raise the Roof,” and helped the library earn the funds needed to install a new roof. He supported the local fire and police stations, as well as Loyola University Maryland, Johns Hopkins University and Towson University Athletics.

“Eddie always had wonderful dreams, for what he thought this community could be…and it didn’t matter what those dreams were, what he came up with, I was along for the ride,” said Mayor Rawlings-Blake.

“This is certainly a bittersweet moment for us. Yet out of all the ways we have honored my father since his passing, this one tops them all, because I know just how much Eddie would have gotten a kick out of this dedication,” said David Dopkin.

Following the unveiling of the street sign and cutting of the ceremonial ribbon to reopen the street, Miss Shirley’s hosted a celebratory reception for attendees in Roland Park.

During the reception, David Dopkin, as well as wife and partner, Brandy Dopkin, had the honor of presenting Miss Shirley’s 10 year team members with custom Awards Plates, thanking each employee for a decade of leadership and dedication to the company.

All attendees also walked away from the event with Orange Miss Shirley’s Coffee Mugs filled with Baltimore’s own Goetz Caramel Creams.

Yet, in all of the excitement over the recent festivities, Miss Shirley’s believes it is only right to also take this time to recognize all those who have made this milestone possible. The 10 Year Anniversary of Roland Park presents itself as the opportune time for the cafe to show its gratitude, and to thank the community that has supported the Maryland Institution for the last decade.

In an effort to show its appreciation to all of Miss Shirley’s loyal guests, supporters, and the surrounding neighborhood, the company has planned a charitable campaign, “10 Months of Shirley’s Giving” to give back some Shirley’s Love to 10 local Baltimore & Annapolis nonprofit organizations, that Eddie held dear to his heart, including a donation to Roland Park’s own Stoney Run Park. Look out for further announcements about #ShirleysGiving, coming in June.

And in further celebration of a Decade of Delicious Daytime Dining, all Miss Shirley’s Cafe locations are excited to feature select Signature Items from the cafe’s Original Menu, in both the Spring and Fall. This season, Miss Shirley’s blasted to the past with favorites like Corporate Executive Chef Brigitte Bledsoe’s Original Sweet Corn Cake Benedict, Breakfast Kabobs, Smoked Salmon Club, Crab & Shrimp Salad Sandwich, and more!

Please find links below for the Gallery of Photos from the event, as well as a Photo Montage Video with Audio Recording of the speeches made by David Dopkin and Mayor Stephanie Rawlings-Blake during the ceremony. Enjoy! 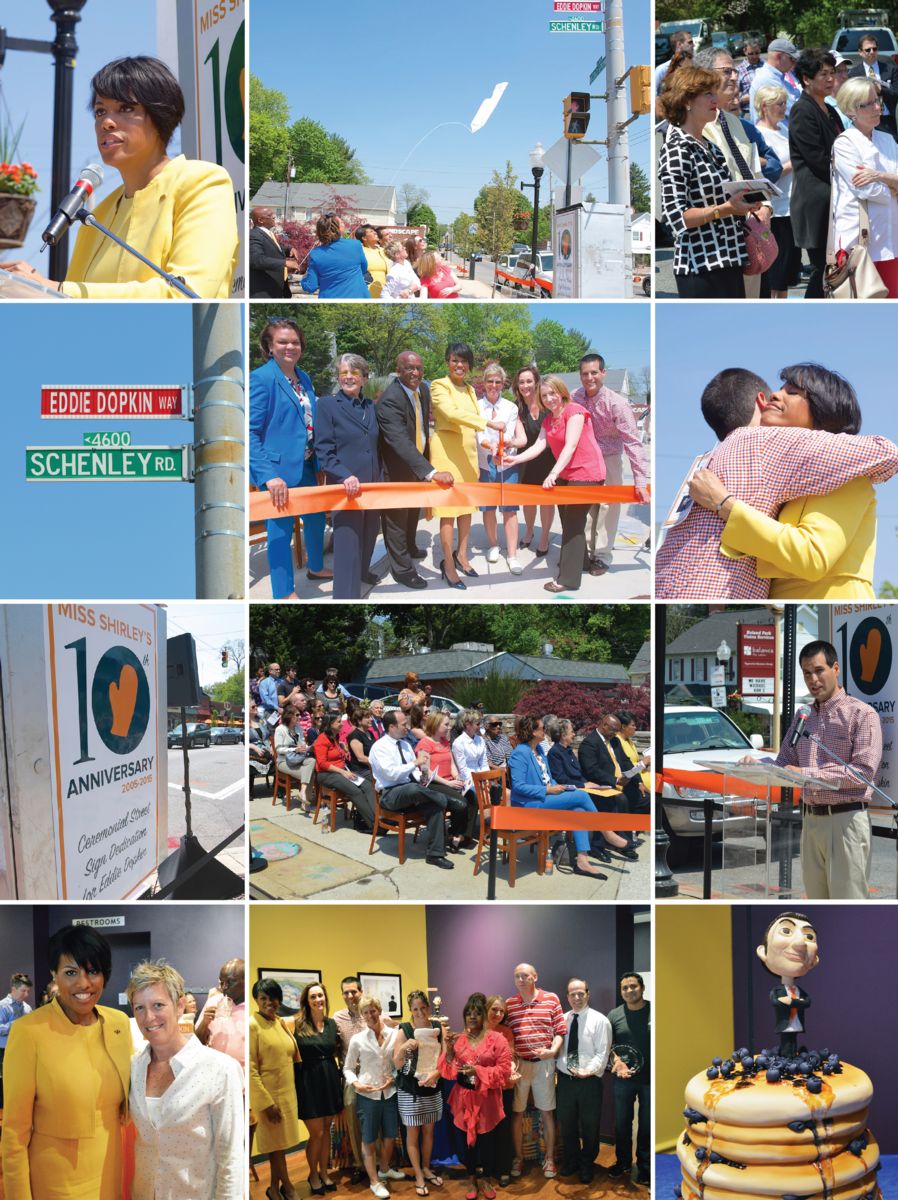